Writers in Western North Carolina? Yes! Asheville has been a haven for writers for well over a century. The mountains have proved an inspiration to those who write whether for personal enjoyment solely or for publication.
Great Smokies Writing River Review: Arts & Culture MagazineProgram     The Writers’ Workshop of Asheville     NC Writers’ Network     Writing Center at AB Tech     The Asheville Poetry Review      Rapid River Review: Arts & Culture Magazine    Jane’s Circles

Given the events of recent days, we asked our friend and teacher John Paul Lederach to offer a reflection for this week’s Pause. He’s spent his life walking with people in many cultures through violent conflict towards transformative change. I’m so grateful for the perspective he opens here, and the fierce/gentle way he invites us into the truth of our time and ourselves.

The images of this week remain seared in our minds. While painful, they will not and should not be unseen, precisely because they help us look more carefully at what peers back at us from our national mirror.

We are not looking at a fringe few. We are gazing upon ourselves. CLICK FOR MORE

We honor the power of asking better questions, model reframed approaches to entrenched debates, and insist that the ruptures above the radar do not tell the whole story of our time. We aspire to amplify and cross-pollinate the generative new realities that are also being woven, one word and one life at a time.

How do we speak the questions we don’t know how to ask each other? How to engage our neighbors who have become strangers? Can we do that even while we continue to hold passionate disagreements on deep convictions? How is technology playing into all this, and how can we shape it to human purposes?

The Civil Conversations Project (CCP) is an open, ongoing conversation offering tools and resources for renewing civic discourse at every level and nourishing common life. It includes audio, video, writing, and guides to help ground and animate new conversation and relationship across the differences of our age.

*LET’S KEEP LIFTING EACH OTHER UP

HOW ARE YOU TODAY?

This interactive book is a game-changer for educators, counselors and parents to use in their efforts to teach kids to name their feelings. It is filled with multicultural images of children showing a variety of emotions from A to Z.

Welcome to the Flatiron Writers Room – providing a brick & mortar hub for the Asheville writing community.

104 Easy Tips for Creating the Abundant Future You Desire

Dawn Starks’s mission throughout her career has been to demystify money matters for people who want to have control over their financial lives. In her new book, Simplify Your Financial Life, she provides 104 easy-to-understand practices that will remove the financial clutter in your life and give you confidence with your money management. Freeing up that cluttered space in your life allows you to live more fully, intentionally, and without hindrances.

It is with great pleasure that we announce that new ownership has come to SheVille! This team of experienced & passionate women will begin managing SheVille.org effective immediately.

I HAVE A SECRET – Grateful Steps Foundation New Arrival

Grateful Steps Publishing House is pleased to announce the arrival of I Have a Secret, a new book by Asheville author, Andrew Barnett. I Have a Secret honors the struggle of children who have felt they must not tell others about the abuse that has been done to them by adults.

Readers are taken on a journey through the accounts of a young lady that survived the Spanish Flu. There are details of hand washing, lockdowns, wearing of facemasks, and care for the sick!

WYATT EARP AN AMERICAN ODYSSEY, An Historical Literary Fiction Trilogy on the Life of Wyatt Earp by Mark Warren

“…Warren is able to convey scenes with a cinematic clarity…” ~ Peta Stevalli on Born to the Badge, New Zealand Booklovers

Featured Book & CD: TOWARD the CLEARING, by Jean Cassidy

We’ve done a re-run of my poetry book and CD, Toward the Clearing, more copies available!

Jean describes her poetry as “a choreography of words” as she joins her poetry with musical accompaniment. Her poetry book includes a CD of the poems accompanied by oboe, English horn, flute, piano, fretless banjo, violin, and balafon in the final product that is a beautiful collaboration with regional musicians and readers. Jean’s work has previously been published in It’s All Relative – Tales from the Tree,  in The Great Smokies Review – Online Publication through UNC Asheville, in Speckled Trout Review, fall 2019 in These Trees by Ruthie Rosauer

We introduced two Youth Poet Laureates over Zoom. Dive into their conversation in Lily Lines at the Washington Post – Story by Madeline Weinfield, Illustrations by Maria Alconanda Brooks

A NOTE FROM ELIZABETH MCCAIN: A Lesbian Belle Tells Southern Stories of Family, Loss and Love

Happy New Year, Everyone,
I hope you had a restful holiday season. 2020 was certainly a difficult year. And 2021 is already intense. I have been shocked and outraged here in the DC area by the recent violent mob of rioters at the Capitol. May we all make room in our hearts for all of our emotions. Deep breaths.
As we continue to live in these unprecedented times of loss, chaos, and uncertainty, I hope you are sharing and appreciating your most meaningful stories from the past ten months-especially stories that give you hope. 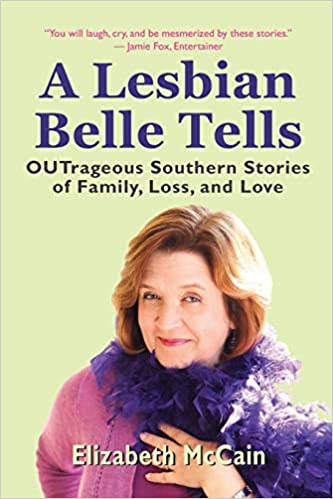 My book was nominated for the best lesbian memoir by Lambda Literary and by the Golden Crown Literary Society!
Save the Date!
I will be sharing some stories from my memoir and show on Feb. 6th on Andrea Myerson’s online show for lesbians, Women On the Net! I will have new stories!
CLICK FOR MORE
SheVille Team January 8, 2021 Featured, Poetry, Literature, Writing, Updates

Our doors are closed but our hearts are always open to our amazing community! We are working daily to fill online orders so you can stay home and stay safe with good books.

We have resumed curbside pickup and are offering limited in-person shopping by appointment. Please visit malaprops.com for important details. Thank you for your support!

Please visit malaprops.com for details. Thank you for your support!

Why Read? Advice From Harold Bloom

The most healing of pleasures

“Reading well is one of the great pleasures that solitude can afford you, because it is, at least in my experience, the most healing of pleasures. It returns you to otherness, whether in yourself or in friends, or in those who may become friends. Imaginative literature is otherness, and as such alleviates loneliness. We read not only because we cannot know enough people, but because friendship is so vulnerable, so likely to diminish or disappear, overcome by space, time, imperfect sympathies, and all the sorrows of familial and passional life.”

BIG BROTHERS BIG SISTERS believes that in each child there is a special spark that, when provided with inspiration and encouragement, will lead them to become a positive, productive citizen of our community and the world.

With just a few hours each month as a volunteer Big Brother or Big Sister, you’ll become a role model and a friend and provide your Little with the support they need to reach their full potential.

And … it’s rewarding and fun!

The Legendary Language of the Appalachian “Holler”

Is the unique Appalachian dialect the preserved language of Elizabethan England? Left over from Scots-Irish immigrants? Or something else altogether?

This afternoon I’m taking a break from making lists of what I think needs to be done in order to fix what’s wrong with the world.

I wish Elijah were still alive, toting his violin to the animal shelter as he often did, to soothe the kittens—when he saw their fear, this was his simple, kind gesture.

Had Elijah been read to as a child, he likely knew the story of the Jewish fairy tale, about children who learned to overcome fear through the power of music?

He would have known of his namesake, the ancient prophet Elijah and his magical violin that had the power to calm, and to release the secret melodies of the heart.

Had he taken his violin with him that evening on his walk to the corner store, it might have saved his life.

It might have signaled to those men who murdered him that he was not a rapist, marauder, or thief.

They might then, have taken a minute to understand that he had simply walked to the corner store to buy some iced tea.

A NOTE FROM JUSTIN, Malaprop’s Senior Buyer and General Manager

The senseless death of George Floyd and so many others has saddened us at Malaprop’s. We are also saddened, angered, disgusted, and disappointed in the behavior of police and our government, both nationally and locally. We feel the sorrow created by our nation’s collective grief and the disappointment in the way local law enforcement and leadership have treated those in our community who wish to have their voices heard.

I am thrilled to announce that with the help of my co-editor, Daniel T. O’Hara, our Book Review Editor, Vanessa Loh, and our Cover Editor, artist Rosie Bruno, Issue 9, a whopper of a Double Issue of The Shining Rock Poetry Anthology & Book Review, is now free and online.

According to the Dolly Parton’s Imagination Library, the single most important activity for building the knowledge required for eventual success in reading is reading aloud to children. The key is to start reading to them at birth.

I’ve been a memoirist since childhood. It started with drawing. Pencil gripped in my fist, I scrawled out the things I saw in my head: herds of horses; packs of wolves; a toothy, bat-winged dragon. These creatures did things I witnessed in my dreams and in my waking life, as I tumbled about in the woods or stared spacily at the walls while my mother tried to get my attention. The adults around me hailed my scrawlings as budding creativity, but to me it was only an observational skill. Perhaps they’re one and the same. CLICK HERE TO CONTINUE

Feature photo by Ross Henderson in Unsplash. Thank you!