A New York Times Best Seller! TOGETHER WE RISE and the WOMEN’S MARCH

When women want our stories told, we have to write ourselves into history. That’s why it’s BIG NEWS that our collective story, Together We Rise, debuted at #5 on the New York Times best seller list! 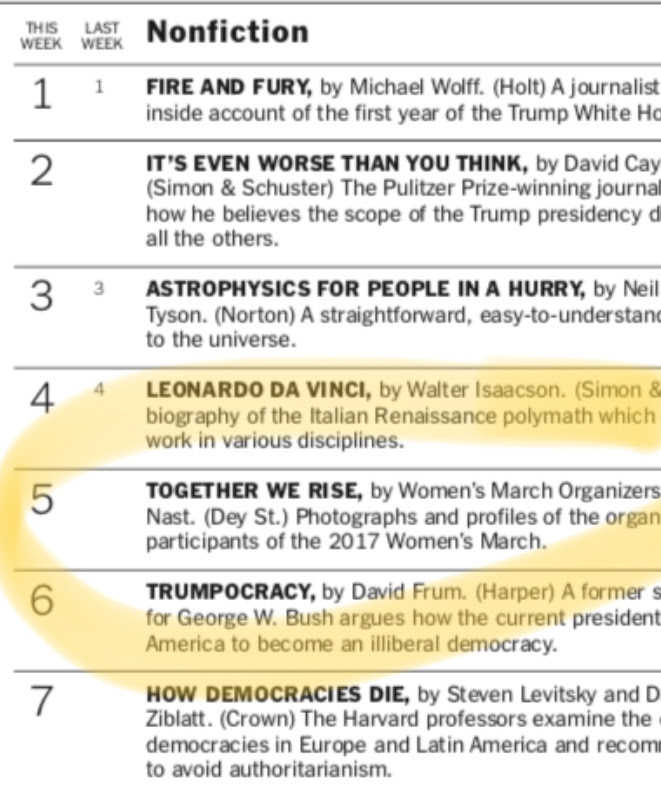 When we set out to put the story of the worldwide Women’s March into print, we hoped that women—and especially girls—would find inspiration to keep resisting in its pages. That is why we are humbled to see generous people stepping forward to donate books to their local schools, girls’ clubs and service organization.

Recently, we met some amazing young women from Girls Today Women Tomorrow during a donation event in Los Angeles. Our goal is to see over 1,000 books donated to local groups serving girls. 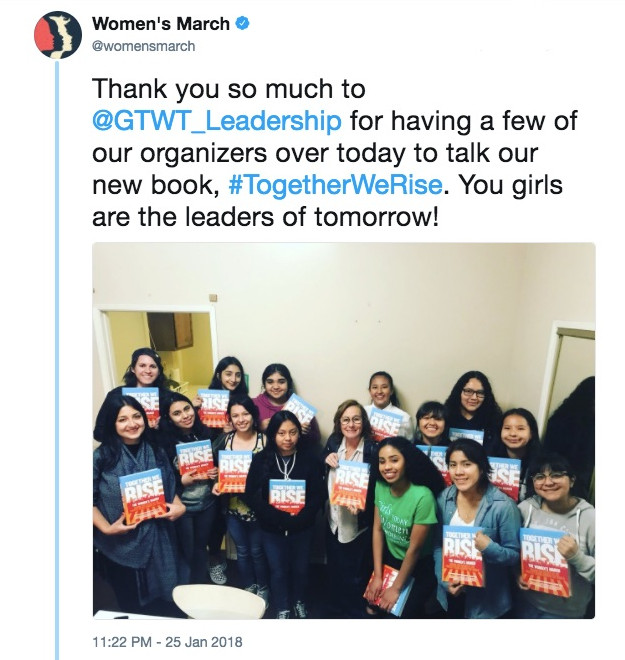 Give a copy to a girl in your life!

Behind the Scenes at the Protest Heard Around the World

“We stood together, using our collective voice as a clear act of resistance. The Women’s March showed the world and now this book amplifies the message: We will not be silenced.”  — Tracee Ellis Ross

“A collection of photos and oral histories that expertly blends the larger-than-life power of the movement and small-scale moments shared among the women in charge… Large and plentiful photos show many shades of hope and inclusion in this energizing and emotional trip through the movement.”  — Booklist *starred review*

“The voices in these pages are the voices of the next generation of progressive leaders, and we would all do well to heed their words.”  — Cecile Richards, President, Planned Parenthood Federation of America

“A robust reverie of resistance. A reminder of the clarion call to action—that was answered with a roar.” — Ava DuVernay

Marking the one-year anniversary of the march, TOGETHER WE RISE: Behind the Scenes at the Protest Heard Around the World is the definitive oral and visual chronicle of this historic event, featuring contributions from writers, political figures, actresses, artists, journalists, and other prominent feminists, including:

Through interviews, photographs, and original essays, this book engages with debates and contributes to discussions around activism, feminism, and the organization of the Women’s March movement.

TOGETHER WE RISE hits bookstores on January 16, 2018, and copies are now available to pre-order!

Women’s March will share revenue generated from TOGETHER WE RISE with three grassroots, women-led organizations: The Gathering for Justice, SisterSong Women of Color Reproductive Justice Collective, and Indigenous Women Rise.This book offers an unprecedented, front-row seat to one of the most galvanizing—and ongoing—movements in American history. Pre-order your copy today, or give one as a gift to a reSister in your life.

P.S. Head to our website to learn about our plans for our one-year anniversary!

We are a one-of-a-kind magazine that provides local, regional, national and international information about women’s lives and education, performing and visual arts and writing, the environment, green living and sustainability and regional Western North Carolina business, people and events. “Villages preserve culture: dress, food and dance are a few examples. As villages grow in population and turn into towns, local cafes make way for large American chains. Handmade leather sandals are discarded for a pair of Western sneakers. Due to its small size, a village fosters a tight-knit sense of community. Justpeace.org explains the meaning of the African proverb, “It takes a village,” by stating that a sense of community is critical to maintaining a healthy society. Village members hold a wealth of information regarding their heritage: they know about the ancient traditions, methods of production and the resources of the land. When villages become dispersed or exterminated in times of war, this anthropological knowledge disappears. Large cities are not as conducive to growing and producing foods such as fruits and vegetables. Villages, on the other hand, usually have ample amounts of land and other resources necessary for growing conditions.” The Importance of Villages by Catherine Capozzi Our Mission SheVille.org provides readers with information important to women’s lives and well-being. We focus primarily on the areas of education & health, business & finance, the arts & the environment. We are particularly interested in local & regional resources, organizations & events.